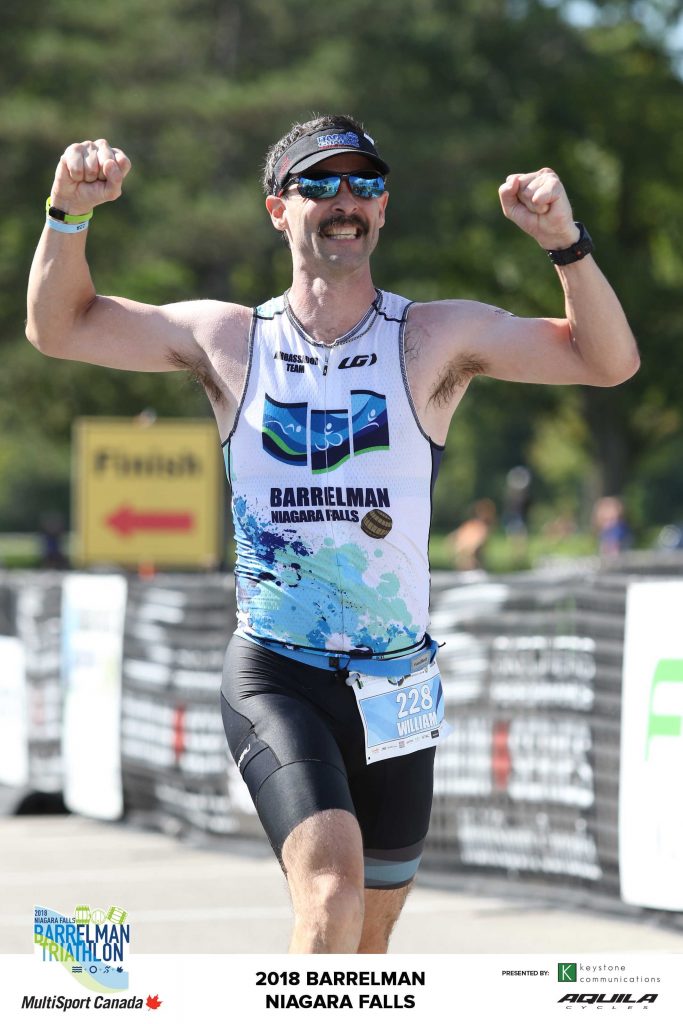 I want to take a couple of paragraphs to try and explain what my finisher picture from Barrelman 2018 means to me.  The first time that I raced the Barrelman was with the Rev3 partnership in 2017.  After planning to do it again, I was lucky enough to be selected as an ambassador.

On May 5, 2018 those plans changed.  While out on a training ride I was involved in a crash when a dog ran out in front of me.  I broke my clavicle and my coracoid, pretty much scrapping all of my plans for 2018.  The best estimate that I heard was 9 months recovery post-surgery, with other estimates as long as a year.

I went to all of my Dr and therapy appointments and did what I was told.  Even though there was no reason to think that I would be able to, I thought that maybe, that there was an outside chance that I might be able to do Barrelman.  I wore my finisher’s hat from 2017 to just about all of my appointments.

A couple of weeks after my surgery, I bought a recumbent bike to put on the trainer (The surgeon was not impressed with my Tim Don halo riding analogy).

In late June, I was told that I could run if I was careful, and I had my first short run on my birthday at the end of June.

7 weeks before Barrelman, I was told that I could resume activity as I could tolerate.  That was all I needed.  I came up with a 7-week training plan.  At week 5, I did an Olympic distance to make sure that everything worked. When I was able to complete that I figure that in 2 weeks I could make a go at Barrelman.

There are people that have overcome more and accomplished more.  But for me, on that day, it was just about overwhelming to cross the finish. It was not my best time by far (and luckily not my worst). I knew that going in that it was just about the finish, and it would have been okay if I was not able to cross the line. It is the best finisher pic that I have, and I love it as it represents that journey.  The event makes it even better.  The atmosphere, the other athletes, everything about the race made it even more special.