This was my third time participating at Barrelman and it did not disappoint. Beautiful picturesque sunrise, calm waters, and the last minute calls for (and finding) assistance; what I’ve come to expect from this race. Conversations about the course and tips were mingled with the general air of excitement. One of the nice touches is the performance of both the American and Canadian national anthems, most races only perform the host country’s.

You could tell the day was going to be a warm one as evidenced by the numerous tubes popping during the pre-race and once the swim waves got underway. Living in an area with heat and humidity I knew to slightly under-inflate my tires but it was nice to have a fellow ambassador stop by and remind me. I checked the pressure before heading down to the swim start.
Barrelman is a unique swim venue – the stands allow spectators to really be part of the excitement and see what’s going on. The in-water start is unusual for many; I practice it by starting laps a meter or so from the edge in the deep end of the pool. It’s all you for the propulsion.

This year I hung out in the water behind the earlier waves instead of the dock. I loved seeing the wave start from the waterline angle. When it was my wave’s turn, I moved up closer to the start buoys and away we went.  The spacing of the waves seemed to be a bit better this year, or maybe it was being one of the last waves. Anyway I didn’t get swam over and was able to follow the tow line for the majority of the swim. Even with this resource I do recommend sighting every so often so you don’t run over swimmers or accidentally hit a rescue boat. The water was cool and clean, I had a slow swim but it’s easy to get into a pace, just needs to be the right pace. The guys at the exit assisting were of tremendous help and I was able to swim right up to the point of almost full body drag.

T1 allows you to pass the cheering stands and the stairs help start the blood flow back into your legs. I have to say that the area was pretty free of debris and I didn’t mind being barefoot here.

Something to practice before race day is how you plan to get the wetsuit off. I usually take my watch off first (if I’m wearing sleeved) then cap, goggles and ear plugs. Place everything except the watch in the swim cap so it’s not lost. Reach back, pull the cord and start slithering out of the sleeves. That way when I reach the bike my torso is free and watch is back on. Ditch the suit into the conveniently provided bags, get the cycling gear on and exit T1. Don’t forget the sunscreen.

It’s a slight uphill to the mount area and this gives you time for any last minute adjustments. With it being windy this year, I personally adopted a conservative approach when going into the wind and chose to expend energy with the wind.

Bike course is well-marked and well-monitored. The surface is mixed but, with the exceptions discussed during the race

briefings, pretty well maintained. Majority of the bad areas could be rode around. The course is very picturesque, especially along the lake and river and thru the fields. Yes there is an odor at the tunnel (due to the limestone and gypsum substrate) but it’s a flat and fast course and easy to make up time. I was happy with my time considering the wind. T2 was easy to navigate, changed to my running gear (forgot sunscreen here and I paid for it), clean dry socks and headed out onto the run course.

The run makes up for the flat bike course with that hill and false flat. And I’m sure everyone knows about Perky the Opossum. Don’t be like Perky: hydrate and watch for cars. Anyway, the run course rolls which isn’t a bad thing. The cold towels in the park and the water pitcher after the descent were definite highlights. I also finally had a chance to pay attention to the view near the casino and it is spectacular. The loop back thru the festival area is a bit of a tease but it does ramp up your energy to head back out. Run aid stations were well stocked, even for a back of the packer like me.

One last pass by the river then it’s into the festival area and the finishers chute for high-fives, your medal and finisher’s hat. The day after is when I head to the falls to get pics with the medal. It’s become something of a tradition. 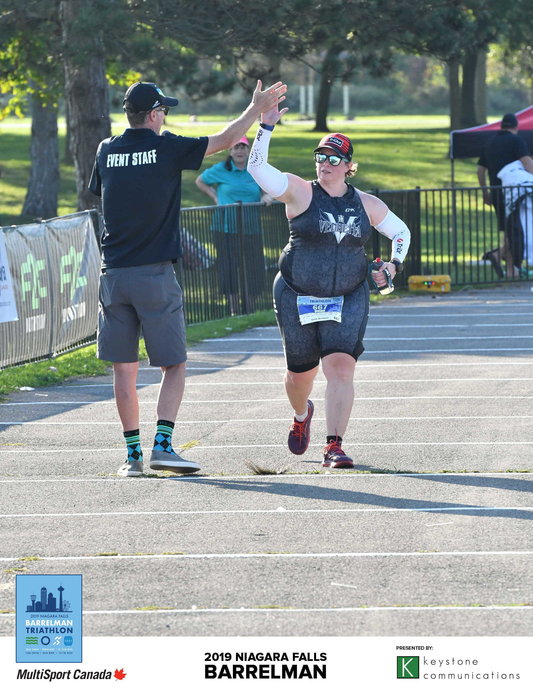 Barrelman, for me, is what a race should be. Well-marked, navigable even when tired, exciting, spectator friendly and a staff that wants to see every athlete succeed. Friendly volunteers and officials who also want to see you succeed. It’s the personal touches that make this a must-do event for anyone who wants a quality event.

And now onto the trails! 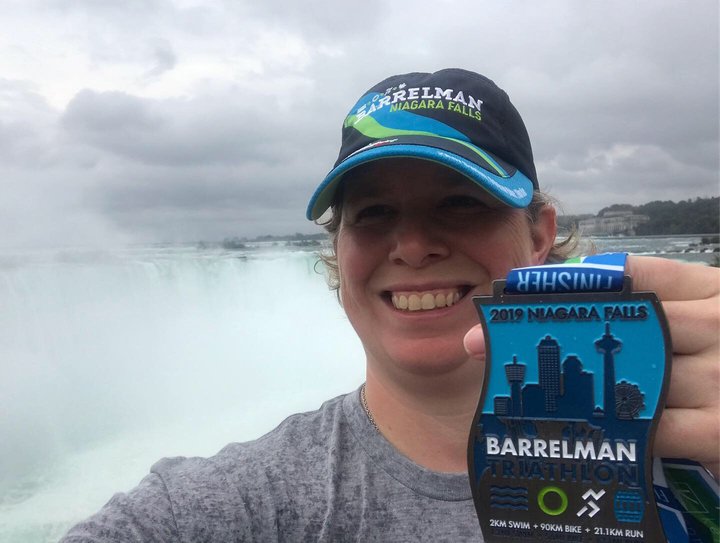